Gérard A. Mourou: In pursuit of new directions in science

EECS: Electrical and Computer Engineering
May 1, 2005
“The future of CUOS is bright,” said Mourou. “Nothing will stop the flow of discoveries.”| Medium Read
Enlarge 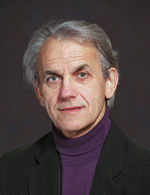 [Written on the occasion of Gérard Mourou’s retirement]

For nearly 30 years, Professor Gérard A. Mourou has pioneered the field of ultrafast lasers and their applications in scientific, engineering, and medical disciplines. Sixteen of those years have been at U-M. Mourou officially retired this past December 2004, and while taking on a new position in his native France, he maintains close ties with his friends and colleagues at the Center for Ultrafast Optical Science.

Mourou became involved in ultrafast optics in the early 1970s when the field was in its infancy. At the École Polytechnique in Paris, he established a new group to perform some of the first experiments using ultrashort-pulse lasers to study molecular dynamics. He also performed seminal experiments on high-power, high-speed photoconductive switching in semiconductors—work that spawned an entirely new subfield of ultrafast optics: ultrafast optoelectronics (the coupling of ultrashort laser pulses with electronics).

Before joining the University of Michigan in 1988, he was a professor and member of The Institute of Optics at the University of Rochester, New York, where he became known as one of the world’s leaders in the development of ultrafast lasers.

The invention for which Mourou is perhaps best known—and which has had the greatest scientific impact—is the technique of chirped pulse amplification (CPA) of ultrashort optical pulses. Before CPA, the attainable power of laboratorysize lasers peaked at about 1 gigawatt. With CPA, terawatt peak powers were achieved on a laser that could fit on a table-top, advancing the limits by three orders of magnitude. To date, several lasers have been made using CPA that have, very briefly, produced peak power far in excess of the continuous world electrical grid power production. It is a technique used in thousands of lasers today to study physics, chemistry, biology, materials science, nuclear engineering, and medicine, and to perform tasks from precision machining in materials processing and surgery to particle acceleration for medical diagnostics. CPA is an achievement for which Mourou has been recognized with major awards, including the R. W. Wood Prize by the Optical Society of America (OSA), and the Harold E. Edgerton Award by The International Society for Optical Engineering.

After arriving at U-M, Mourou quickly established the NSF Science and Technology Center for Ultrafast Optical Science (CUOS) in 1991. Mourou said, “My vision for CUOS was to have as many different activities as possible, relying on one thing: shophausen—everything in-house. CUOS brings together electrical engineering, materials science, biomedical engineering, physics, and chemistry. During this time, more than 100 PhD students have been trained in CUOS laboratories. And there have been many discoveries, including some very important inventions and discoveries.”

Throughout his career, Mourou has been granted 18 patents, with additional patents in progress. His preference is to conduct research in a university setting, and move the technological innovations into the marketplace. Since moving to Ann Arbor, he has been remarkably successful at this process, enriching the area as a result. It is estimated that companies that got their start in CUOS research laboratories have created about 200 new high-level jobs in Michigan alone, making Ann Arbor a focal point for laser research.

Four companies have been started by former CUOS scientists, with Mourou’s encouragement and direction; all but one are local. These are: Picometrix (fast measurement instrumentation, Steve Williamson and Janus Valmanis), Clark-MXR (scientific lasers and micromachining, Philippe Bado), Translume (waveguide optics, Philippe Bado) and Intralase (precision surgery, Ronald Kurtz and Tabor Juhasz). CUOS also has attracted companies to Ann Arbor such as IMRA-America, a leading company in short-pulse lasers. These companies have attracted more than 10 million dollars in NSF Small Business Innovation Research Programs.

“Nothing will stop the flow of discoveries.”

When Steve Williamson, President and CTO of Picometrix, and Janus Valmanis left CUOS to form their company, Mourou supported their efforts by offering them a lab to develop their first product. “This product is still the world’s fastest photo detector,” said Williamson. He adds, “Gérard did this because he has in his own marrow the desire to see this technology move from the laboratory into the industrial setting. There are dozens of companies that he has either directly or indirectly touched in this quest.”

Intralase grew from an inspiring talk Mourou gave at the Kellogg Eye Center, which attracted the attention of Dr. Ronald Kurtz. With the use of lasers with sufficiently short optical pulses, the company was able to do eye surgery without leaving any tears of the surrounding tissue. This activity was originally supported in a CUOS lab, and continues even today.

Ted Norris, interim director of CUOS, says, “CUOS was really an experiment on how to do interdisciplinary research at a university, and it was a tremendous success. What I really learned from Mourou is a fearless pursuit of new directions in science. He is an extraordinary mentor.”

Mourou’s scientific achievements have earned him the honor of being elected as a member of the National Academy of Engineering. He was awarded the 2004 IEEE/LEOS Quantum Electronics Award, and the 1999 IEEE D. Sarnoff Award. He is an IEEE and OSA Fellow. In France, Mourou was awarded the Chevalier de l’Ordre des Palmes Académiques for his pioneering work in ultrafast optics, notably the invention in electronics of the electro-optic sampling technique, and in physics the technique of CPA, which opened up the field of Strong-Field Relativistic Physics, and applications ranging from micromachining to precision eye surgery.

Reflections on the Past, and Future Directions

Mourou recently reflected on his discoveries at his retirement party this past December, to a room filled with friends, colleagues, and admirers, recalling the kilohertz lasers, micromachining and laser surgery without collateral damage – which will lead to “fantastic surgery,” and the powerful new laser, HERCULES. He has worked tirelessly and enthusiastically to bring excellent scientists to Michigan, and to share the resulting breakthroughs with others. He arranged research collaborations with scientists in France and Japan, bringing scholars to CUOS, and has organized and given countless conferences and talks. He co-founded the Ultrafast Conference, now a major conference in the field, and founded the Picosecond Electronic and Opto-electronic Conference.

It is fitting that a year before his retirement, Mourou’s research group gave the world HERCULES (High-Energy Repetitive CUos Laser System), built by research scientist Dr. Victor Yanovsky. Mourou says, “The ultra-fast laser pulse generated by HERCULES is 50 times more powerful than all the world’s power plants combined.” HERCULES’ laser is so compact and intense that it could revolutionize the way cancer is treated.

CUOS also now boasts a kilohertz high field laser called the Lambda cubed laser. John Nees, associate research scientist, is conducting experiments on this laser – generating new pulses of light that are attoseconds in duration instead of femtoseconds. An attosecond is used to measure the time it takes for an electron to circle a nucleus. Through research in the attosecond domain, and through higher intensity lasers, there may be a way to pursue one of Mourou’s guiding lights for High Field science, which is to break down a vacuum and essentially create matter from “nothing.”

“CUOS currently holds the world’s record for the highest peak power of any laser on the planet,” said Norris. “That was set just last May, so we continue to be at the frontier.”

Mourou, who has dual French and American citizenship, returned to his native France this past December to continue his scientific research. His new research home is the Laboratoire d’Optique Appliquée in Paris. CUOS researchers are still in touch with Mourou on a regular basis.

“The future of CUOS is bright,” said Mourou. “Nothing will stop the flow of discoveries.”