EECS: Electrical and Computer Engineering
May 1, 2004
Today, no other biped machine walks faster, is as stable, or varies its walking speed so adroitly.| Medium Read
Enlarge 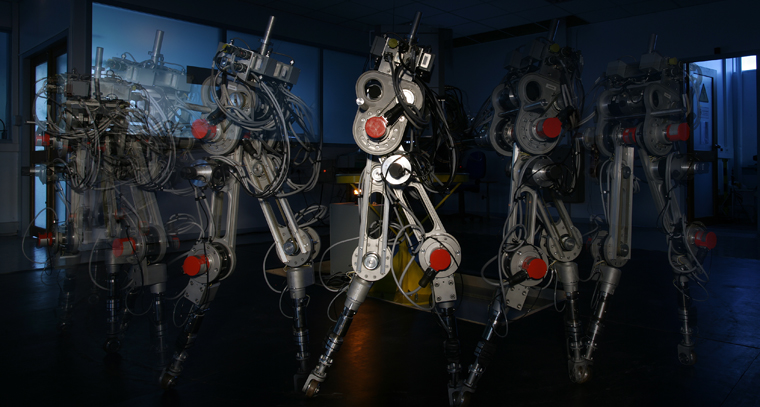 There are more than a hundred biped robots being developed by research laboratories throughout the world. Though each one was designed for a unique purpose, they do share a common feature – they walk on their own two legs. But now, a new robot is giving all the others a run for their money. And researchers at the University of Michigan are in control.

The biped robot named RABBIT took its first steps in July 2002 after years of preparation, analysis, and work in control theory. Today, no other biped machine walks faster, is as stable, or varies its walking speed so adroitly. In fact, this biped walked on its first try—an unprecedented feat. 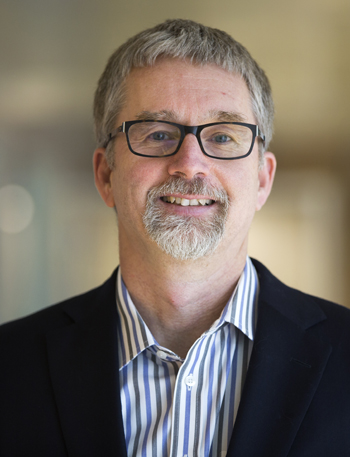 “RABBIT may be the first step toward the realization of bipedal walking robots that are mechanically simpler and less costly than existing robots,” says EECS Prof. Jessy W. Grizzle, who developed the control theory for the robot. Based at the Laboratoire Automatique de Grenoble (LAG) in Grenoble, France, RABBIT is part of the French project, ROBEA. The project involves seven laboratories and multiple researchers in the areas of mechanics, robotics, and control theory. While on sabbatical in France in 1998, Grizzle met with the lead engineer, Gabriel Abba. At the time, their team didn’t have extensive expertise in nonlinear control. That’s where Jessy stepped in.

“Control is the discipline of modifying the behavior of an existing system on the basis of measuring how it evolves in time, and then adjusting the inputs that go into the system. A control algorithm closes the loop from the measurements to the inputs,” said Grizzle. These closed-loop systems will determine how skillfully RABBIT walks in its environment.

It took almost 3 ½ years from the time Grizzle learned about the project, to when he could start the first experiments on the machine; during this time the robot was being constructed. “Fortunately, we had a lot of time to come up with new ideas,”
said Grizzle.

The most significant idea to come from this project was to propose a method that departed from a heuristic means of perfecting the robot’s motion, which basically uses trial and error experiments until it walks smoothly – to an analytical method that can predict in advance how the robot will move.

“If you look at all the human-like robots out there,” Grizzle explains, “they walk rather slowly, awkwardly. From the time a bipedal robot is built and takes its first steps, to the time it will walk as good as it’s going to get, can take 6 months to a year because there have been too few scientific principles to work from. The robot’s control algorithms are being adjusted in an ad hoc manner. We were able to come up with a design principle that allowed us to work directly from a mathematical model – using performance objectives such as the leg end not requiring a coeffi cient of friction greater than 0.6 in order to not slip, the motor torques being all less than 100 Newton-meters, the robot walking at 1.5 meters per second, and the available energy being used in the most efficient manner. We worked from desired characteristics of our walking cycle and then systematically produced the feedback actions that would induce the robot to walk in that manner.”

“When we actually started experiments, after two days debugging the hardware, we turned on the controller and it performed exactly as the theory had predicted. It was just amazing. This had never, ever, been achieved in such a convincing manner. We published the theory about a year before we did the experiments; it’s starting to garner a lot of  recognition.”

RABBIT was conceived to be the simplest mechanical structure that is representative of
human walking. Other biped robots have feet, but feet add extra weight and complexity. Moreover, the heuristics used by other researchers completely break down when the foot is replaced by a point contact–imagine walking on stilts. Therefore, the French researchers gave RABBIT a point foot that acts like an ankle, is ergonomically sound, and makes RABBIT an elegant platform for developing new control principles for walking.

“The fact that the robot had no feet led us to completely rethink the control problem,” says Grizzle. “Our feedback controller designs are very different from the traditionally used method of trajectory tracking.” “We never compute a planned trajectory. If you push backward on other robots while they are walking, they will fall down. If you push RABBIT backward, it begins to walk backward without any change in the feedback controller. The gait we achieved in RABBIT is very human-like. ”

The most technologically advanced biped robots— Honda’s Asimo, Sony’s SDR-4X, and the University of Munich’s Johnnie — use an unnatural flat-footed walking motion. It is anticipated that Grizzle’s theory will lead to a new control theory for walking with feet.

“The direct contribution to machines is that our theoretical results make it now possible to design stable walking motions over a much higher range of walking speeds,” Grizzle says. “Our designs are direct, and thus significantly cut down on development time. In addition, we have achieved very elegant walking gaits with a much simpler machine.”

“These things are dreams, we’re not there yet. But you need scientific principles to get there.”

Grizzle was assisted in the project by graduate student Eric Westervelt, who is now assistant professor of mechanical engineering at Ohio State University. Westervelt credits the interdisciplinary nature of his work on RABBIT and the accessibility of U-M faculty with his decision to become further involved with robotics. Westervelt felt that his graduate experience was an “eye opener. I came to realize that I could explore things on my own, and I came up with solutions that were unexpected. You need to develop your own intuition and gain your own experiences.”

According to Grizzle, Eric was a rare student who had a burning desire to understand things at a fundamental level. “He took my mathematical theory and turned it into the most beautiful design technique that you could possibly imagine. He created new theory of his own to justify all of his design steps.” This technique will be extended to working with feet, whether a normal actuated human foot, or a prosthetic foot.

Computer Science sophomore, Evan Leung, contributed to the project by writing MATLAB code that would convert symbolic representations of dynamic models and feedback loops into FORTRAN 77– the language of choice for numerical optimization. “This was my first real exposure to writing code to be used by a client,” says Leung. “This kind of thinking is crucial, and something that isn’t necessarily learned in coursework.” Leung also created computer animations of the walking robot. “Evan’s animations were absolutely helpful and crucial to our progress,” said Grizzle. Leung is now an associate for Urban Science, a consulting firm for the automotive, financial, and retail industries, located in Detroit.

Grizzle’s work has promising applications in designing human prosthetics. “Our analytic method was very effective in reducing the amount of experimental work that was required with the heuristic methods,” explains Grizzle. “If you can take properties of a patient – their height, weight, how the valid leg functions – and combine this with the correct principles of walking, maybe you could more quickly have the prosthesis adapt its characteristics to the person, instead of the person adapting his or her gait to the prosthesis – which is what happens now. These things are dreams, we’re not there yet. But you need scientific principles to get there.”

Jessy is currently working with a team of U-M researchers to apply their expertise to the problem of rehabilitation of stroke and spinal injury patients. This team includes Prof. Dan Ferris in Kinesiology and Biomedical Engineering, Wayne Aldridge in Neurology, Brent Gillespie in Mechanical Engineering, and Dan Koditschek, a colleague in EECS. Grizzle reflects on this future application and work with patients, “working with people is thousands of times more difficult than working with machines, but it is very rewarding.”

Why the title “Run, RABBIT, Run!”? Grizzle, Westervelt, and a French colleague, Christine Chevallereau, have just recently extended their theory of walking to encompass running. “On paper, the principles we have discovered for running look as solid as those we developed for walking,” said Grizzle, “and the computer simulations seem convincing as well. But when we try it on the mechanism, I’m sure there will be surprises! That work is scheduled for summer 2004. I’ll see you in Grenoble!”