Claude E. Shannon Statue Dedication at the University of Michigan 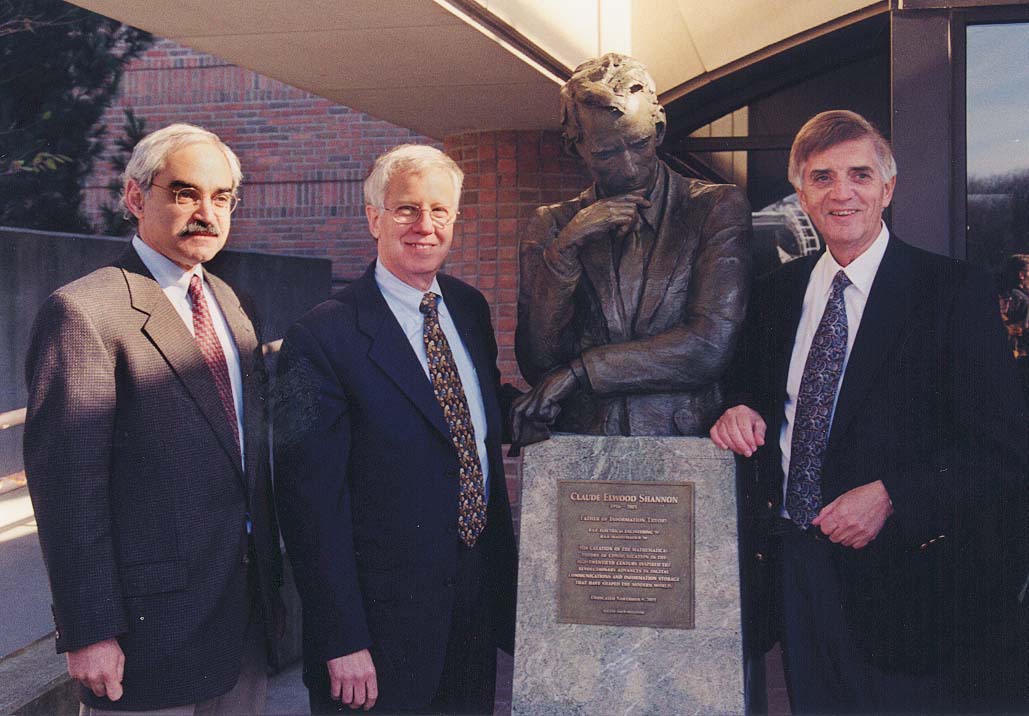 At noon on a beautiful day November 9, 2001, approximately two hundred members of the University of Michigan community attended the dedication of the statue of Claude E. Shannon.

The statue is located at the west entrance to the EECS Building on the North Campus of the University of Michigan in Ann Arbor, Michigan.

Claude E. Shannon (April 30, 1916 – February 24, 2001) was a University of Michigan alumnus, receiving bachelor’s degrees in electrical engineering and mathematics in 1936.

His legendary 1948 paper, “The Mathematical Theory of Communication” unveiled the vast potential for digital communications and inspired virtually all of the work in digital communications that followed. He is also famous for his work on cryptography, the sampling theorem, and the discovery of the relevance of Boolean algebra to logic circuit design. He is considered to be one of the people most responsible for ushering in the digital age.

Dr. Lucky had delivered the inaugural William Gould Dow Distinguished Lecture the day before. His lecture was titled, “Disruptive Technologies Amidst the Storm in Telecommunications.” 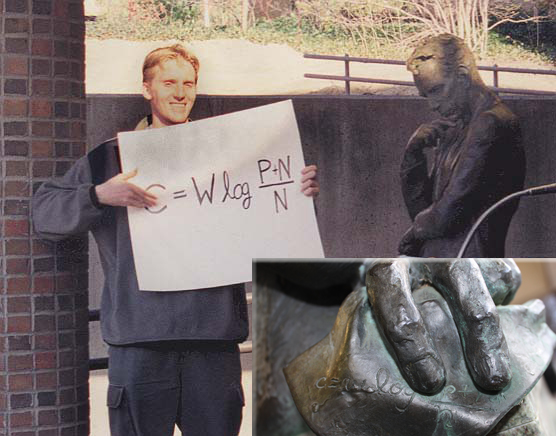 IMAGE:  Graduate student Kevin Holt displays Shannon's famous theorem - the capacity formula for the white Gaussian noise channel. The theorem is inscribed on the sheet of paper in Shannon's left hand. (C is the number of bits per second that can be reliably transmitted with bandwidth W and power P when combatting noise power N.)
Enlarge 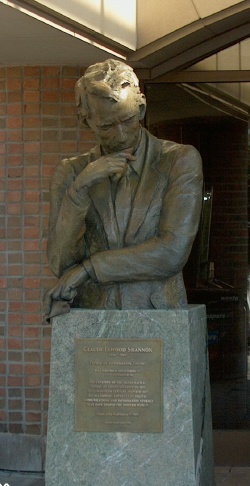 About the Shannon Statue 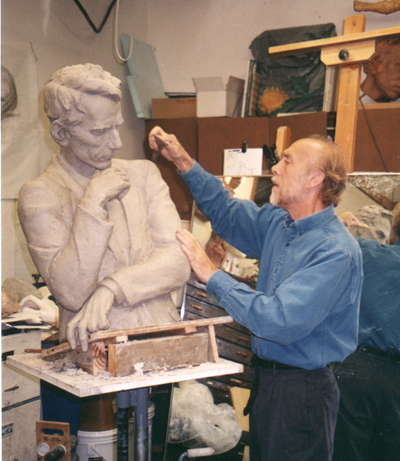 Claude Shannon was a living legend to Prof. Dave Neuhoff, who specializes in information theory and communications. Prof. Neuhoff occasionally drove through the small Michigan town of Shannon’s youth, Gaylord – and in the late 1990’s, when Shannon was in his 80’s, he approached the town with the idea of a plaque to commemorate the “Father of Information Theory.”.

The IEEE Information Theory Societyenthusiastically approved funding for the project, which evolved from a plaque to a statue. A committee was formed to decide how to proceed, chaired by Prof. Neuhoff and including Professors Daniel J. Costello and Thomas Fuja (BSE EE and Comp Eng, U-M) of Notre Dame University, and Prof. Steven W. McLaughlin (PhD EE:Systems, U-M) of Georgia Tech.

The committee selected five locations for statues – each having significance in the life and career of Claude Shannon. The sixth location was added at the request of Prof. Jack Wolf, a well-known information theorist who attended the Gaylord dedication.

The original Claude E. Shannon sculpture was created by Eugene Daub and commissioned by the Information Theory Society. The subsequent statues are identical except for the slip of paper held in Shannon’s left hand. At Michigan, the paper includes Shannon’s famous theorem included in his landmark paper of 1948. 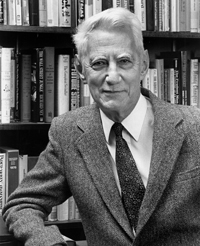 Six statues of Claude Shannon by the sculptor Eugene Daub have been dedicated at various sites throughout the United States. All but one location is tied to his life in some way. Gaylord, MI was the Shannon’s hometown. He attended the University of Michigan as an undergraduate student and pursued his graduate studies at the Massachusetts Institute of Technology (MIT), and he worked at Bell Labs.

Following is information and/or photos about each additional location:

Read about the commissioning of the original Claude E. Shannon statue by the IEEE Information Theory Society (ITS), and learn what is unique about each of the subsequent statues 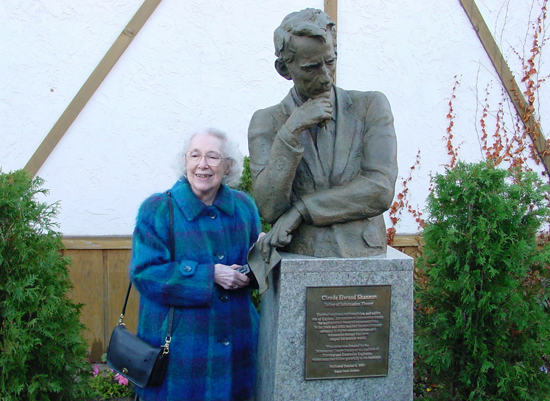 Electrical engineer, mathematician, and native
son of Gaylord. His creation of information theory,
the mathematical theory of communication,
in the 1940s and 1950s inspired the revolutionary
advances in digital communications and
information storage that have
shaped the modern world.

This statue was donated by the
Information Theory Society of the Institute of
Electrical and Electronics Engineers,
whose members follow gratefully in his footsteps.

On October 6, before an enthusiastic crowd of IT Society members and local residents, a bronze statue of Claude Shannon was dedicated by ITS President Vijay Bhargava in Gaylord, Michigan — Shannon’s home town. Unveiled by Mrs. Betty Shannon and sculptor Eugene Daub, the statue is located in Shannon Park in the center of downtown Gaylord. Shannon Park is the former site of the Shannon Building, built and owned by Claude Shannon’s father. The statue, commissioned by the IEEE Information Theory Society, includes the AWGN capacity formula on a sheet of “paper” in Claude’s left hand.

Immediately following the unveiling, the engineers, spouses and local residents moved to the nearby Otsego Club to escape the prematurely wintry weather and to attend a reception and panel discussion. The panel of distinguished information theorists, Tony Ephremides (moderator), Dick Blahut, Bob Gray, Bob McEliece, Gottfried Ungerboeck and Jack Wolf, made brief and personal remarks about the impact of Shannon’s work on themselves and on society at large. A copy of Shannon’s collected works, signed by the information theorists attending, was given to the Gaylord Historical Society.